A formidable British Lionhearts squad featuring this summer’s Olympic gold medallist Galal Yafai and current world champion Lawrence Okolie had been decimated by the Cubans in the World Series of Boxing in June 2016.

Clarke was surrounded by subdued teammates as he went through the final preparations for a closing fight against Olympic Youth Gold medallist Lenier Pero.

“AJ IS AN INSPIRATION”👊@BigFrazeBoxer says he’s delighted to have @anthonyjoshua as his manager and he hopes to emulate his achievements 🌟🤞 pic.twitter.com/aqAWe3qLvC

“I was in the changing rooms looking around. All I could see was heads down, ice packs on heads, bust noses, bust lips.

“The night before, I was up all night ill. I ate something dodgy and I was umming and arring about fighting.

“If one of our guys had won and we got one win, I might have stepped aside, because I was really bad with an upset stomach. 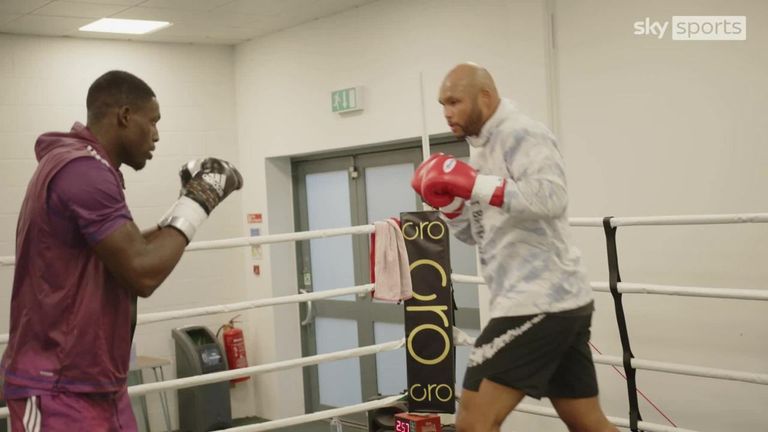 “But when it got to 9-0, the pride side of me came out and I needed to try and do something. Not just for me, but for us as fighters from Britain. For the team.”

Pero had punished over 100 amateur opponents and would have viewed Clarke as the latest addition to his lengthy win column.

“I hit him the round before with a straight right hand and I saw him stiffen up a little bit.

“I went back to the corner, then I just let my hands go and I sunk one into the body.

“I think it was a right hook to the body and I just caught him flush and that was it. I took the wind out of him.”

“That was just a proud one for me. I can remember the feeling.

“There was the whole Cuban team sat there, looking at me with motionless faces. Our team was jumping up, ice packs on heads, arms in slings, bust noses.

“The elation because I got that one victory. It was 9-1 in the end. That was a special moment for me.”

Named as Team GB’s captain, Clarke justified his role at the Tokyo Games as he returned with a bronze medal.

Pero’s younger sibling Dainier was representing Cuba in Japan and they crossed paths, but did not share the ring.

“I saw his brother at the Olympics. I’m sure he was dying to fight me,” said Clarke.

“I know everyone in amateur boxing. Every country, every team, everyone knew me. I smile and laugh with everyone, but I walked past this guy and there were no smiles.

“He knew what I did to his brother.

“I can remember walking by with Galal and I said, ‘He really don’t like me.’

“Galal said: ‘I wouldn’t, you knocked his brother out.'”

Clarke is now set to launch his professional career next year after signing an exclusive long-term promotional deal with BOXXER.

“I’m going to knock people out, it’s as simple as that,” he told Sky Sports.

“I’m good enough to knock people, that’s what I want to do. I don’t want to get in there and fiddle about with people.

“I want to put great events on, I want to be involved in massive nights all over the UK.”

Get the hottest update from the middle of the internet

Our sincere apology to mtugist.com

College football bowl picks, predictions for all 43 postseason games in 2021-22

When is the Heisman Trophy ceremony? Date, odds, finalists for 2021 award presentation

7 worst Heisman Trophy races of all time, from Mark Ingram to Gino Torretta

This website uses cookies to improve your experience while you navigate through the website. Out of these, the cookies that are categorized as necessary are stored on your browser as they are essential for the working of basic functionalities of the website. We also use third-party cookies that help us analyze and understand how you use this website. These cookies will be stored in your browser only with your consent. You also have the option to opt-out of these cookies. But opting out of some of these cookies may affect your browsing experience.
Necessary Always Enabled
Necessary cookies are absolutely essential for the website to function properly. These cookies ensure basic functionalities and security features of the website, anonymously.
Functional
Functional cookies help to perform certain functionalities like sharing the content of the website on social media platforms, collect feedbacks, and other third-party features.
Performance
Performance cookies are used to understand and analyze the key performance indexes of the website which helps in delivering a better user experience for the visitors.
Analytics
Analytical cookies are used to understand how visitors interact with the website. These cookies help provide information on metrics the number of visitors, bounce rate, traffic source, etc.
Advertisement
Advertisement cookies are used to provide visitors with relevant ads and marketing campaigns. These cookies track visitors across websites and collect information to provide customized ads.
Others
Other uncategorized cookies are those that are being analyzed and have not been classified into a category as yet.
SAVE & ACCEPT
wpDiscuz
0
0
Would love your thoughts, please comment.x
()
x
| Reply
Close
Close
Sign In